Alzheimer’s: What if they aren’t tangles but knots? 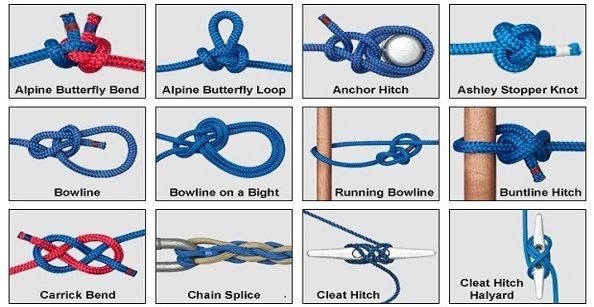 I’ve been really concerned about the lack of progress on Alzheimer’s. So in early 2018 I posted on the topic (“We urgently need a Manhattan Project for Alzheimer's!” 13 January, 2018).

In my post I pointed out the research into the disease wasn’t working out because it was concerned only with amyloid plaque, that none of the drugs developed for amyloid had worked, and that the NIH was partly at fault because it insisted that research must be directed to amyloid, and if it wasn’t, it didn’t fund the proposal and that was why no other promising approaches were being followed.

At the time I talked with a number of researchers who insisted that the amyloid approach would work out, and that I was a layman so didn’t know what I was talking about. Let us scientists handle it, moron! We know what we’re doing!

Well, another day another dollar. Not 5 months later the NIH changed its tune and announced a strategy to go after new and promising approaches (“NIH summit delivers recommendations to accelerate therapy development for Alzheimer’s disease May 2018”). Could my post have had some tiny impact after all?

Since that time the NIH has dropped its insistence on all research being focused on amyloid. If you follow the field, you will know that finally scientists in the filed have concluded that amyloid is not the cause at all. If anything is connected to it, it’s the tangles of tau that we now see which the research shows more likely to be the, or a culprit. The buzzword now is neurofibrillary tangles.

Still, I wouldn’t hold my breath. As we’ve seen the scientific bandwagon is alive and well in these august circles and until we’ve nailed it completely down and the criminal is dead, you don’t ever want to say ever or never.

Still, even I am prepared to accept that there’s been some progress, even if belated. Now there’s a ton of new research going on such as on the bacteria in gum disease, the so-called tau tangles and  the promising but mysterious diabetes 3 which was ongoing before my post but has now received a new lease on life.

But let’s talk about the infamous tau for a moment. There’s something going on here which piques my interest. That is the description you see every time the word “tau” is mentioned. The actual terms are “amyloid plaques” and “tau tangles” It turns out that the amyloid plaque means insoluble bits of stuff where the tau tangles are thin strands of stuff that are somehow coiled around and inside brain cells.

There’s been a suspicion for some years, also not fully explored because of the NIH’s de facto moratorium on new research approaches, that Alzheimer’s is actually a prion disease, in fact a double-prion disease. Yes, both amyloid and tau are forms of prions.

Prions are misfolded proteins that can pass this onto to other proteins in the brain. Its famously known in mad cow disease. It has some superficial resemblance, so no-one is claiming it is the same as Alzheimer’s. Its just that it is another mass of characteristic cells that contain abnormal proteins, distorted to strange shapes that we don’t understand still.

So, there seems to be something topological going on here. Plaque is tiny masses of stuff. Tau is comprised tangles of threads. Prions cause misfolded proteins. Is the body producing some strange kinds of molecular knots where that are causing subcellular changes that literally tie cells in knots? And does this tying up prevent them from doing their normal job, like running a properly functioning brain?

Ok so I’m a layman and I don’t know diddly about it. But crazy is my business. Here’s where I’m going with this.

One of the newest areas of mathematics has been the mathematical theory of knots. Topology generally has been around for donkeys’ years but it’s only recently that the math wizards have been decoding how knots work. And of the latest areas if the stability of a knot. Turns out you can predict this using some fancy math footwork including the number of crossings involved and the direction in which the rope segments twist as the knot is pulled tight.

In other words, tau and amyloid are actually knots resulting from or expressed through misfolded proteins and this robs them of their ability to work properly. If we knew how to untie these knots, could the problem be solved? Is it the tiny ropes that transport vital chemicals to parts of the brain that are tied in knots that causes dementia and the other symptoms we see in Alzheimer’s (not to mention other forms of neurodegenerative disease)?

OK so you might say, interesting, but how the hell would you untie those knots anyway, even if this idea holds any water at all?

Well, what’s CRISPR for? What about all the recent more sophisticated variants? Isn’t cutting and pasting DNA actually untying, tying retying knots anyway? Aren’t we finding new ways of doing this stuff with every passing day? Give it a shot, before we both get Alzheimer’s, dummy!

Thinking outside the universe?

Well, why not? Doesn’t it sound like it’s a lead of sorts? And don’t we need leads? And isn’t it the case that often the true breakthroughs come from other disciplines which seem to have no connection whatsoever to the problem you’re trying to solve.

If Alzheimer’s were like flu, at least generally not serious, maybe you wouldn’t need to follow up crazy ideas like this. But Alzheimer’s is probably the worse disease of our time. I don’t have to tell you why. Isn’t it worth following through on some crazy stuff just because the payoff it we solve the problem is so massive, personally and socially?

It seems to me that the Alzheimer’s field still isn’t thinking enough outside the box. Yes, the NIH and the fields fixation with amyloid has been broken, but that doesn’t mean the scientists in this area have become freethinkers yet. I think we going to need a lot more free-thinking before we break the back of this terrible disease.

Let’s take a chance or two here folks. Even if it’s some crazy mathematical knot theory. What’s to lose but our brains?

Does high protein cause heart disease – and Alzhei...
Can AIs be Entangled?