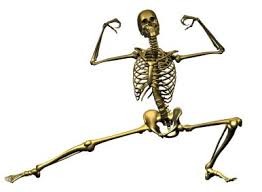 Stem cells are hot! They are being touted for being able to cure just about everything. Even off-the-shelf cures for cancer! There’s a lot of quack remedies out there. On the other hand, stem cells are real and so is their potential to do good things for humans. Is there some thing we can do to help these good guys along?

Well, first a couple of fascinating factoids. Did you know that bones have extensive networks of blood vessels in them? Yep, it’s amazing, we never knew that until very recently.

Oh, and here’s another interesting little factoid. Stem cells are manufactured within the bone marrow. You knew that too, right? So that’s why there’s all these blood vessels in bones right, to supply the stem cell factories buried within! Smart stuff this evolution thing!

So, exercise is even greater than you thought because it will get those little stem cell factories all jazzed up, right?  Not really! Although it turns out that exercise does indeed help the production of stem cells.

But there’s a catch. It turns out that low impact sports like cycling don’t exercise your bones. They don’t put enough pressure on them. So, all those namby pambies who won’t run because they say it hurts their knees too much are unwittingly giving themselves soft bones.

In other words, those bones that you don’t want to become softer as you get older are getting softer even as you swim or do yoga daily. Nature is tough right?

About 10 million people here in Yankee-land suffer from osteoporosis, that is, brittle bones; one in three of the ladies, and one in five macho-men, will break a leg (or something else, maybe a hip) because of osteoporosis, often the spine. This can be the beginning of the end for many people. So, this finding about exercise is not without consequence.

There’s a new drug that for the first time will build new bone, instead of just stopping you losing it. But it’s doubtful that using it is better than exercising your bones yourself.

So, here’s the problem for people who don’t run. Their bones get softer quicker. And they don’t get the pressure to get the blood flowing in those newly discovered blood circulation networks within bones. So, the $64 question: what does that do, or not do, to your production of stem cells within bones? Do you get less of them than a red-blooded runner?

It’s starting to look like exercising by pounding your legs in running might lead to more production of your stem cells. But the researchers haven’t got to this yet. No doubt they will given that exercise in all its forms is such a hot research topic these days.

Here’s some takeaways from all of the above. First bones aren’t just static, inert lumps of fleshy stone, as we commonly believe. Bones are organs too! There’s a lot going on inside them and because of them. No doubt we’re going to find these ways go beyond stem cells, even though that’s an amazing thing in itself.

Second, everything is connected. If you don’t exercise your bones, there will be consequences. Who would have thought that the cure for cancer and lots of other things lay inside your bone marrow?

Third, knowing what we do about bones gives us new ideas to help our own health and longevity. My bet: soon the fitness and medical illuminati will be telling you to exercise your bones, and there will be new types of machines invented to help you do it more easily.

Could fintech replace government - in planetary co...
Your brain on Wi-Fi and LSD