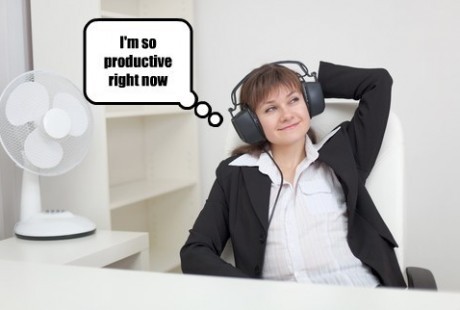 Well, whadya know? US worker productivity growth rose sluggishly in the last quarter (at 0.9%). So what? This is kind of boring stuff after my usual posts on quantum brains, love force-fields and the like. What could possibly be of existential interest here?

Productivity growth is usually said to be caused by eye-glazingly boring phenomena such as growth in capital stock, tech advances and worker skills. Well, maybe. But it might as well be caused by polar bear mating habits and increases in autism for all we know. After all, US productivity growth is sluggish and we haven’t been able to do anything about it, despite the number of economists per square mile increasing in developed countries, quant investment models, Nobel prizes in economics and so on.

So here’s an idea as to why our productivity growth is so underwhelming. How about streaming music? Am I kidding?

The conventional wisdom is that streaming music helps millions of people increase their productivity by making people less bored and shutting out the noise from being in an open-plan office. I guess it’s a millennials thing so I’m not going to be popular in those quarters. Nor with the like of Spotify and Apple.

In fact the research that has been conducted on the effects of listening to music as you work at the same time is that it reduces your productivity.

I am a runner and I used to listen to music whenever I ran. I stopped some years ago because I found that it was reducing my ability to come up with good writing ideas and to work them out as I ran. It was actually more pleasant for me to run to music; it just resulted in less and lower quality intellectual output for me.

Cognitive neuroscientists call this a drain on your attentional capacity. I love those words so much I’m gonna accept them for the purposes of this article (see Daniel J. Levitin and his book on "This is Your Brain on Music."). In fact this effect occurs on just about every intellectual task you can imagine. Bummer right?

Hmm, let’s think about this for a moment. How many people listen to steaming music anyway? Surely it it’s not big enough to matter?

Well here’s some boring statistics. In 2015, there was a 76% increase in streaming music feeds compared with the year before. There were more than 250 billion streams in 2016, and overall on-demand streams (including video) have reached 431 billion. That’s about 40% of all music listening, and the share is growing rapidly. Forget those CDs folks.

You get my drift. The implication is that currently around half of all workers are listening to streaming music at work. And, as we have shown, that reduces their attentional capacity and their work performance. Could this be a major reason why US productivity growth is sluggish? Could it be that as streaming music continues its heady climb, worker productivity will continue its rate of decline, maybe even start to drop?

Is music streaming on a par and maybe even worse in its impact on worker productivity this opioids and other drugs/ Have we been focusing on the wrong factors in worker productivity growth? Is that because we spend too much time listening to the economists rather than looking at the impact of global societal trends that the economists haven’t caught up with yet maybe coz none of them are millennials and they think that their kids are just wastrels for listening to music as they surf the web – at work?

There is another perspective here though that’s worth considering. That is that the reason music is so addictive is that it triggers the releases of neurotransmitters such as dopamine and serotonin. These make you feel happier and elevate your mood, of course at the cost of reducing your attention.

So from this angle, music is actually the equivalent of a drug itself. In other words, all those millennial streaming-music listeners are in fact on drugs too, this time, internally-produced.

In some ways it’s the equivalent of the drug called khat, a leaf chewed in East Africa by millions that gives them a high. We Europeans are just one step ahead of that; we don’t chew on a psychoactive leaf; instead we listen to music which produces a psychoactive effect – and it’s legal! Way to go dude!

If there is any truth to my apparently crazy hypothesis, it means that you can’t be an economist by just studying economics. And people will go off and do things that they shouldn’t even though economists wouldn’t like it. And there’s a law of unintended consequences that kicks in when you suspect it least, yada yada.

I wonder what type of music reduces productivity least? Is there a genre that really kills it? As streaming becomes ubiquitous, will worker productivity start to drop in absolute terms? In that case, would the use of robots increase, maybe massively? Would that then cause massive unemployment and social dysfunction? Could streaming music be the thin edge of a dystopian wedge which is about to engulf us?

Ok so you can go back to listening to Adele now. She’s the greatest, right?

A Third Way for AI: Cognitively-Augmented Animals?
Is love a physical force-field?