Are those missing aliens lurking in the hidden dimensions of string theory? 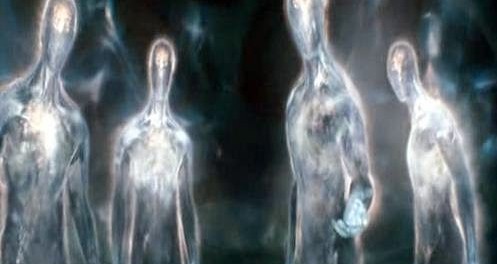 Another day another UFO. Did you see the report that one was seen over Myrtle Beach in August of this year? Hmmm, Fox News, maybe it’s fake news?

But then again, maybe not. You might have also noticed that three navy pilots tracked a seeming UFO late last year using Raytheon radar mounted in US navy fighter jets. This report was carried by Raytheon itself, so at least its confident about its radar, if not the UFO part.

Of course, we have millions of people engaged in SETI, the search for extraterrestrial intelligence. So far nothing, nada, zilch. This is known as the Fermi Paradox; how come, if there are so many billions of galaxies, we haven’t seen a single alien? But maybe we have; they’re just speeding around in hot UFOs too fleet of jet for our military to follow; but which we’re seeing all the time, as at Myrtle Beach above.

The conservative case is that all our efforts so far to search for aliens have covered only an infinitesimal space to find the cunning little critters. That space includes the three dimensions of space and many other technical characteristics of potential alien signals. So, they could be out there all right; we just haven’t searched far enough and probably never will given the utter cosmic vastness of the places they could be hidden in.

Have you heard about string theory? Yep, that’s the one that posits that everything is made of tiny little strings. Fool around enough with the math and it predicts amazing stuff about matter and space. In particular it can reconcile gravity and quantum physics in the one theory, something no other theory has been about to achieve.

Oh, and one other thing. Take the math far enough and string theory requires that you have other dimensions. One variant says there must be 10 dimensions, other variants posit 9 and so on. But they all result in a number of dimensions up from 9 or 10. How come these mathematicians are so fuzzy?

I thought they were supposed to be like knife-edge precise?

It’s common to see scientists saying that the other dimensions in string theory are all “curled” up so that’s why we can’t see them, coz they’re too small. Maybe so. Then again maybe not. Maybe there are other dimensions where everything is the opposite of curled up, namely stretched out, maybe over what for us would be unimaginable distances, at least as compared with those in our own dimension?

Maybe these stretched out dimensions are the habitat of the missing aliens? They wouldn’t see us because we are far too small, in what for them would be a curled-up dimension. In other words, we could be the – to them – aliens that inhabit the curled-up dimensions of string theory. Maybe we just look like quantum phenomena to them, if they ever get to see us at all.

So maybe it’s us humans who are the missing aliens after all! Or at least, one of them.

Sci-Fi as usual has a perspective on this. Check out the book by the leading Chinese sci-fi writer Cicin Liu, “Ball Lightning.”

If you have more time read Cicin Liu’s superb book “The Three-Body Problem”. Don’t tell the Feds you are reading a book by a Chinese though; they might decide to throw you into one of those other dimensions, maybe the smallest one so you can never stretch out.

Its always seemed to me that there must be intelligent life out there because of the unimaginable vastness of space and the trillions of stars and planets out there. But if you add to that numerous universes as in multiverse then there’s even more places for them to be hiding. And now, if you add multiple dimensions that we haven’t seen yet, there’s even more. Many, many, many more.

Maybe we really are alone, not just in our universe, but also in the multiverse and now, the muldiverse. If so that’s a big deal. That, for me, is a difficult one to swallow.

Then again, who am I to judge?

The imminent Great Global Final Biological Collaps...
Are fruits and veggies bad for you?