Space is actually for making ourselves more beautiful 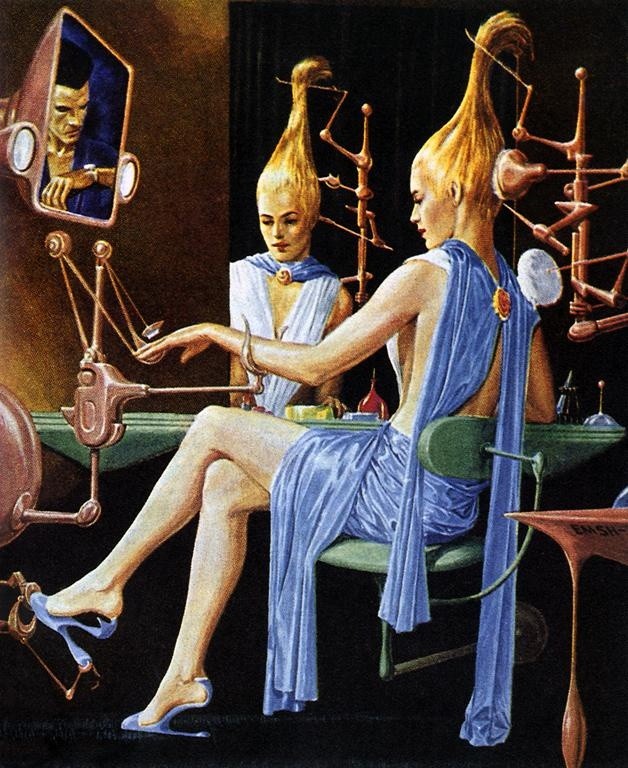 Did you notice the news about Scott Kelly, the US astronaut? His DNA changed while he was in space, 7% of it to be exact. Actually it turns out that the report wasn’t quite correct; in fact the way his DNA was expressed changed for 7% of it. Whatever, his body changed.

How so? Well for a start he got 2 inches taller (but that was temporary). And the good bit; his telomeres got longer. That means that he actually got younger at the cellular level. Not so fast though; he was mentally and cognitively adversely affected. You win some, you lose some I guess.

But if you told me I could get younger by going into space for a few weeks count me in. What if you told me that by using CRISPR, cutting and pasting for genes, you could make the increase in height permanent, and maybe even higher? The impact on my telomeres even better? And in the process cut the expression of my fat genes so I come back either as a super-thin model or a muscular hunk. Count me in right again bro!

The currently fashionable meme is that Elon Musk, Jeff Bezos and Richard Branson are going to make millions from space tourism. I’m not so sure about that. If I have a 30%+ chance of dying via the space rocket blowing up, a micro-meteorite blowing out my space lodging, or so on, how many people would really want to take those odds? Maybe a few, but folks this is far from being a mass market.

On the other hand you can change the gig a bit. Instead of going to Mars with all its attendant risks, you could just sling me into low Earth orbit for a few weeks to lose some fat and get longer telomeres. Minimal risks, I get younger and lose that fat. What’s not to like?

In other words, the market I see for the near future in space is not tourism at all. It’s beauty. Body shaping, losing weight, getting younger, all without Botox, bariatric surgery and liposuction. The big market here is for spas in space, cosmic body beautifiers where we can do it all without fear of any paparazzi or nosy neighbors.

It’s often said that humans do crazy things because we are curious knowledge seekers. Maybe there’s 3 people on Earth like that. The other 7 billion are motivated by one reason only; vanity, pure and simple. Once you understand that you have the formula for cleaning up (financially) in space.

With spas as the driving goal, things get much easier. You don’t need a spacecraft fitted out to get you to Mars with lots of heavy duty tech stuff on board. All you need is a space station fitted out like Trump One or Mar a Lago in which you can do absolutely nothing while being made younger, fitter, more handsome or beautiful, according to your preference.

I have another theory (yes, like always) that I think is particularly intriguing. I think the first true mass usage of CRISPR is to fiddle with your genes so bald and balding men get a lush head of hair. That is sure to get our current US President up there in double quick time. That’s the real kicker for the men. Then wait for the market to explode.

In other words, the correct paradigm for space colonization is not Christopher Columbus; its Jessica Simpson and Weight Watchers.

Now that I have shown the True Path it should be pretty easy for the space companies to get cracking and cook up a huge market. Space ships should look and feel like terrestrial spas with massage, nail salons and cosmetologists (definitely not comologists).

They should be aiming marketing at millennials who are dating, transgender and romantically active people. Thee space companies should definitely avoid sci-fi freaks and space buffs. Neither of these will buy any of the cosmetic trimmings, where all the money is to be made. Sci-fi buffas are notoriously cheap, as we all know too well.

Once you understand that everything related to space is really about beauty, you open the floodgates for fashion, as in space fashion. Runways in space so you can check out the latest and see if you could ever fit into them.

True there will be at least 5 people on Earth who will take the trek into space because of their insatiable intellectual curiosity. However the other 99.999% of the Great Unwashed will go to make themselves more beautiful; trust me they want that way more than seeing if there was ever life on Mars or how robots philosophize.

And lo and behold, we've just seen a plan for a hotel in space! How about that for luck; without doubt it will have a stupendous spa. Forget about the tourism stuff though. Oh, forgot to mention; it will set you back almost $1 million per night, but who’s counting?

I don’t think we should restrict this just to space ships though. I think the model can also be replicated on the ground, so to speak. My guess is that the dust on Mars and the Moon has amazing skin-preservation properties and can be made into an ultra-expensive cosmetic or herbal remedy, like rhinoceros horn or toad penises.

That opens the floodgates to massive imports too from space. How about air that has been irradiated in space? That process will give it amazing health and youth-preservation benefits that will result in huge prices for small vials of the substance. Same thing for space-water which I predict will be bigger than Coke and Pepsi combined or bottled super-water from Lourdes.

Come to think of it, can we find some hot springs on Mars, the Moon, or especially Europa? Then the space guys have surely got it made!