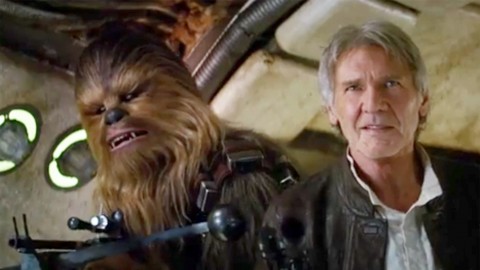 So yep, went to the “The Force Awakens” really no choice, you’re a pariah or worse if you snub it. In a word it’s awful, utter rubbish. So how come it’s the highest-grossing film of all time? What’s wrong with me?

Let’s dispose of the plot; worse than infantile. Content banal and repetitious, old-hat way past a million faults. Acting: total crud. Special effects; were there any?

Also I did note that in my theater at least, the audience was not at capacity, and mainly oldies like me, or young kids. Not much in-between. The only millennials there were press-ganged into it by their parents who needed an explanation of what death stars are. So I guess all that’s gotta tell you something.

But it still leaves the issue, why is it so popular? It can’t be that it’s just a franchise; after 6, progressively worse remakes, there’s nothing new left to see.

Here’s my stab at it. This good and evil stuff works, kind of. It’s good for kids too. But on its own that doesn’t offer enough to make it a must-see. It just gives you air cover if someone wonders why the hell you would give up your valuable time for such drivel: politically correct answer; it’s about good guys trying to win. Moral education for the bambinos.

And there’s also the family angle. These Skywalkers sure do stick together. That’s heartening too for the conservatives out there who think the family has gone to pot. “The Force Awakens” is the family force awakening too, right? Finally!!

But the big kahuna is this. “Force” demonstrates to us that even the great unwashed believe in other planets and space exploration. It sounds corny, but what else does it have to offer?

In other words, for all its enduring nastiness, the human race still has an uplifting and touching belief in the future, that it belongs in space and that we humans – so hapless and brutish on our own planet – can do good and win over evil in other extra-terrestrial climes.

It’s the American missionary way. Even a brutish Stormtrooper can be converted as we see with John Boyega’s character. We’re all Jehovah’s Witnesses at heart.

Is there a whiff of American Exceptionalism here? Bringing the American Way to Alpha Centauri? Is that why it’s grossing so much? Why we all identify with it? Take that all you foreigners!

If this sounds far-fetched think of how people are already lining up to pay for a seat to space on Richard Branson’s Virgin One. How others are vying to be the first person to live on Mars, even though they won’t come back. How we are all watching with bated breath as Bezos’ Blue Origin and Elon Musk’s SpaceX are pulling off the amazing feat (for now) of landing a used launch rocket back on terra firma.

It’s exciting too. Even Viking LGBT Cruises pale into insignificance when you think of tooling around Mars in an extraterrestrial Humvee. Or fitting in a quick jaunt to Pluto or the Kuiper Belt. If we get that far, D'Qar looks like it’s gonna be next door. Then we can nail the unspeakable Darth Vader and fix those pesky Stormtroopers.

We’ve all seen all there is to see on Earth, dutifully destroyed it. Now we are in search of new habitats to explore and destroy before we go to the next one. And the fundamental lesson of modern astronomy and cosmology is that there are an awful lot of planets out there just waiting to be pacified, exploited and devastated.

If we’re lucky there’s gonna be beautiful women there all ready to hop into the sack with us, just like we saw in Avatar. So there’s a sexual undertone here too, exactly what the doctor ordered, but in a virginal pure way. Just as we expect in a family-themed movie. That’s Rey’s job, by the way, whose performance, to be fair is not so bad, albeit in a clingy, cloying way.

You know, now I’ve explained all this to you, suddenly the movie doesn’t look quite so bad. Maybe you should see it after all.

Just don’t say I told you to go.