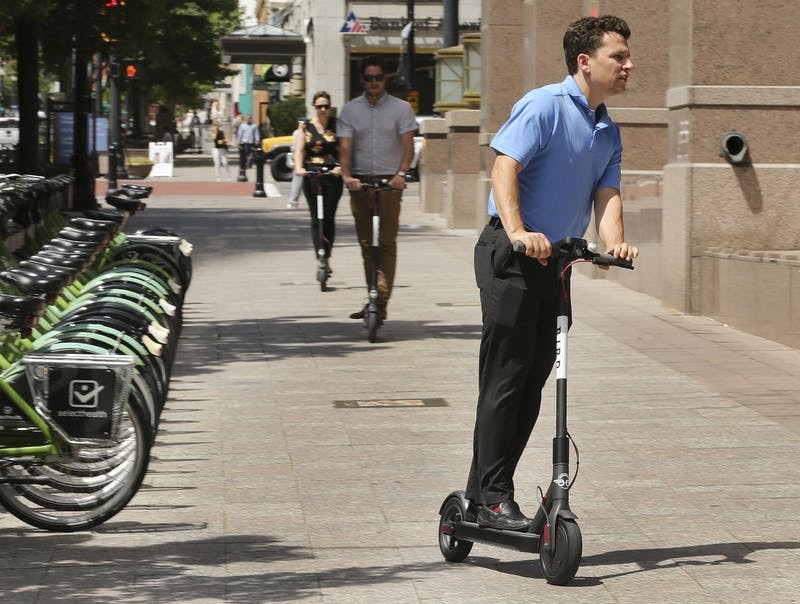 It seems that Americans, especially millennials don’t want to drive any more or own cars. Part of the problem is that the average commuter spends three times as much time in their annual commuting that they do on vacation. Hmmm but how about those Teslas? But I get it. Muscle cars are out; electric vehicles are in. Metrosexuals for EVs right?

But how about the sudden explosion in bike sharing and now especially electric scooters? Seems like they are the cat’s whiskers now. Now a growing number of cities are banning them, they are getting so popular and therefore potentially dangerous. Seems to me that rather than people not wanting to drive, they want to commute on two wheels rather than 4. The sign of a yearning for less complicated times maybe?

Those of my readers who have achieved at least partial literacy will remember the mantra “Four legs good, two legs bad” in George Orwell’s “Animal Farm”. These fine  bons mots are enunciated by the illustrious Snowball, who of course is a pig, (you knew that right?) – and the words of which are part of the Seven Commandments of Animalism. Of course, it’s all part of making pigs great again, nothing new under the Sun, right? Those two-legged humans just don’t cut the mustard.

I think that we are undergoing a momentous shift in global mobility patterns that hasn’t formally registered yet; its from 4 wheels to two. As in, two wheels good, four wheels bad. The cool way to travel now is by bike or scooter; cars with four wheels are totally uncool. I wonder if the auto companies have absorbed that yet?

So here’s my first crazy prediction; soon all cars will just have two wheels. Anything else will be regarded as ecologically unacceptable.

My theory is that two is in and four are out. For starters it’s frugal, which is a code word for sustainable, as in slowing down climate change. Two is lighter which means less carbon emissions. Two is stylish, just like a Steve Jobs outfit in black; it’s mobility a la mode. Who doesn’t want to be fashionable, right? Two is simpler, coz its only 2 times 1 and of course is way less than 4.

So, it is with great regret I pronounce George Orwell wrong; now it’s 2 legs good, four legs bad, coz its just the more sustainable way to go. Case closed.

You might think that I’m talking only about terrestrial mobility, but no, I think that’s the least of it. How about drones? Aren’t they the ultimate future of mobility? Why have 4 rotors when you can have two? Balance you say? Isn’t that what AI and gyroscopes are for? 2 rotors weigh much less than 4 and 4 makes the vehicle way more complex. That’s why we went to twin-engine jets right?

So, here’s my out-of-the-box prediction about drones. We’re moving to a 2-rotor future, and 4 will be, yet again, totally uncool. So, don’t let yourself be seen traveling in a 4-rotor drone, or even operating one on the sly. Just totally uncool, dude.

But I have even more apocalyptic visions to disclose. Why go to two if you can go to one? It’s simpler still right, way more stylish and cheaper to boot. So, I think Orwell was also wrong to omit the number one. If AI and gyroscopes can make 2 even possible, why not one? I don’t think we are thinking broadly enough.

And now, come to think of it, even 1 could well be way too much. Isn’t zero a good example for all of us? It’s the ultimate in sustainability, unless you go negative; come to think of it, there’s an idea. How about 0 legs, wheels or rotors, just quantum drives and quantum gyroscopes, save us so much time and effort. Isn’t that the ultimate for stopping climate change in its (2-wheel) tracks?

But there’s yet another angle here. We’ve been talking about the numbers 2 and 4 and they are all part of the number 8. Is there something here we’re missing? Yes, indeed!

I’m certain that given the high intellectual capacity of the esteemed readers of my humble blog, all of you have heard about octonions (if you understand a single word in this Wikipedia article, please let me know)? You know, eight dimensional numbers which may well be to physics what holes are to donuts. It’s likely that octonions are the true driving mechanism behind any kind of mobility, be it legs, wheels or quantum vectors.

I think we’re indubitably going to discover that all modes of transportation are ultimately octonionic. Octonions are the ultimate way to meld frugality, simplicity, the cool factor and cost in the one unique package that will save all of us from the much-dreaded rise in global temperatures and thus total global oblivion

I don’t know if octonions beat the Seven Laws of Animalism, but why shouldn’t Animal Farm be subject to a friendly bit of revisionism, just like everything else in this world?

The California wildfires - Stay in your car in a w...
Ban tourism to slow down climate change?