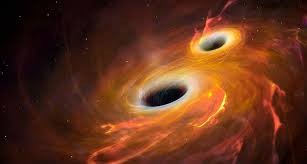 Stephen Hawking is dead and we will all miss him. One of the reasons for missing him is that he really was responsible for popularizing black holes. Now any Tom, Dick and Harry can toss the term around, talking knowledgeably about singularities, black hole horizons and information loss. All way above my pay grade.

But I have a question. What is inside black holes? The physicists don’t actually know. They can talk about things like the Schwarzschild radius, the event horizon and, Hawking’s special contribution, the hair on black holes. But if you ask them directly what’s actually going on inside a black hole, they can’t tell you.

That leaves an opening for yours truly, because if they don’t know, they can’t tell me I’m wrong when I make some spectacularly uninformed guess about the goings-on inside black holes. Like an ultra-huge factory for chocolate bars (I love chocolate), a monster elephant conservation reserve (someone out there is doing the right thing), an alien practice shooting gallery (in case humans start getting really aggressive); why not?

So here’s my train of thought. Black holes can be very massive; for example astronomers have found one black hole that weighs 17 billion solar masses. That’s a lot of burgers. So there’s gotta be a lot of stuff going on there, even if we don’t know what it is.

You might think that the stuff is all crushed so tight it just can’t move. Maybe so. But the boffins also tell us that density decreases with the size of the black hole. So that means there must be at least a little wiggle room. What is all that wiggling doing then?

The existing debate about black holes seems to revolve around things such as them maybe being a singularity and whether or not they preserve the information that is being sucked into them. Or that they are a wormhole into other universes. Maybe so again. But that still doesn’t tell me what’s inside. As a wannabe consumer of cosmological factoids, I want to know.

So let’s say that there a super-dense slurry of multiple new types of matter inside a black hole. There will be convection currents carrying this stuff around. We can’t call it matter in the conventional sense since it will be made up of particles and energy we have never yet seen, even in stars, which are much too cold by comparison to be useful reference points.

These convection currents have been operating for billions of years. So we can assume that some self-organization has occurred. So there will be some macro-structures inside made of novel types of matter and energy. These macro-structures could be analogs of elements making up the black holes’ equivalents of things like stones and other inanimate things.

Could black holes actually be comprised of living, intelligent and conscious structures just like those posited by Fred Hoyle in his famous novel “The Black Cloud”? But because of the immense gravity of a black hole, none of the manifestations of this intelligence can ever get out? Are black holes the ultimate cosmic embodiment of locked-in syndrome? There’s lots going on but you can’t see what it is?

But wait: Hawking became famous for his theory that a tiny bit of information does get out of black holes because of quantum effects just on the black hole horizon. So that any intelligence inside isn’t totally locked in. Is there ultra-intelligence sizzling inside every black hole straining to get out and actually getting a little past the cosmic censor, namely the black holes refusal to allow light to escape?

We used to think that black holes were something pretty unique. Then we started to finds lots of them. Seems like, at a minimum, they are at the center of every galaxy.

The true purpose of the universe is to create the right ecology for the ultra-intelligences of the black holes to blossom, flourish and chat with each other? Is there actually a booming social community of black holes flourishing throughout the universe? Does it have its own ultra-advanced version of Facebook then? So the universe is really an ecology where the main player is black holes and the rest of us just play along to help it all happen?

It’s going to be a long time before we have real data on what’s inside black holes. Meanwhile we can have some fun thinking about it.